An Australian Rodent (KAOS RODENT SLIDER) found only in tiny parts of the main land along the East Coast it has been declared a new species for the fly angler. Scientists pro fly tier and founder of Kaos Cod Flys, Ross Virty Virt has said. It’s the first artificial mammal known to be wiped out in its short finding by humans-caused by poor tying skills, quality materials, short cuts and no idea of the time spent to perfect the construction of the KAOS SLIDER. 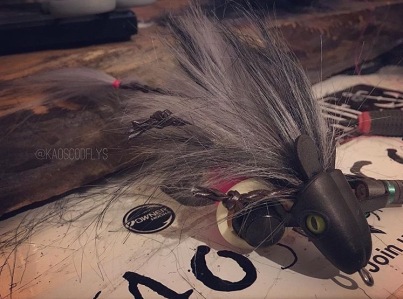 All thorough survey using small animal traps (VICES), camera vision, (photography) daytime and night-time social media and searches from December 1st to August 31st 2016 only turn up small populations of this animal. New report written by Virty from Geelong Victoria of the Department of Kaos Cod Flys and Joe Blow at the University of Fly Designs Australia was released today.

In brief the report said the “key factor” responsible for killing off the fly was incorrect fly tying skills, quality of materials and a lack of understanding of the build. Also the flooding of bullshit on multiple occasions during the last decade, “causing dramatic miss interpretation of fly fishing for Murray cod of articles and other written crap.  A habitat loss in around fly tying studios and the slaughter by huge individuals directly the Murray cod. I’ll insure the public it’s not loss or forgotten too quickly of the enjoyment of Murray cod on fly. The high floods of inquiries push the Rodents form there habitat causing them in to a panic and make the wrong decisions. In that the fly tier scarred to the traps, ties vigorously to create a live action fly to then be cast across the water surface and beneath are lurking Murray cod of all sizes to inhale and devour these creations.

Scientists have predicted that the revamped Rodent fly design will charge the way anglers think and target Murray cod. Specialist in this field say the KAOS rodent will thrive in the coming seasons, more fly tying with development including colour, size and style at the Laboratory of Kaos Cod Flys this will encourage others to follow the trend of my own style.

Anglers will see Australia’s Rivers, Lakes and impoundment systems as well as private habitats will report the high strikes and landing rate with a possibility that the Rodent fly will become at the top of the Murray cods food chain.

This rodent will tolerate all ranges of temperatures, such as freezing cold nights to very high daylight conditions. The KAOS rodent, which looks like a small brown rat but much larger, lives in very remote locations such as fly tying studios, tackle stores and very large fly boxes.  It will be considered the most effective fly on the market and the only risk now is not having the Rodent in your fly box.

Memories of cod on fly in 2012...... #kaos #kaoscodflys #castkaos #codonfly #wintercod #murraycod
Thinking of life on the river! #kaoscodflys #kaos #fj #fjcruiser #crashpadgear #sunset #australia #camping #ozpig
Escaping the city life over the Xmas period with my boys! Unexpected captures as we were targeting cod, great to see a population of yellas. With @marquis.virt Awesome days on the river.... #kaoscodflys #loddonriver #kaos #yellowbelly #weedbeds #scottflyrods #lamsonwaterworks #apearmapparel #apearmy #shotoniphone #iphone
Pinkies on plastics and salmon off the top! An awesome trip with the family 🍻@queenscliff in the Rip in one of the most treacherous, wild, dangerous and understandably Australia’s most insane body off water to navigate and fish! #kaoscodflys #fishvic #vicfish #queenscliff #theheads #therip #victoria #apearm #apearmapparel #pinkies #salmonfishing
Chris Adams from Ammo Flies sent my son a message after I typed to contact him. Just have a read, it shows you the keyboard warrior he is and accused me of being a child and women basher! Thanks Chris 👍 #ammo #ammoflies
Absolutely an amazing trip Czech nymphing in the Czech Republic 🇨🇿 A last minute arrangement and hooked up a half day guided trip with @fishinginprague So stoked to have learnt the correct technique and outfit of Czech nymphing. Now I know the difference between French/Czech nymphing. Definitely will be using Czech or French style in Australia. #czechflyfishing #flyfishingprague #kaoscodflys #czechrepublic #flyfishingeurope #chub #czechnymphing #roach